Leadership and Coaching: Does a 360-degree competency assessment help or hinder performance? 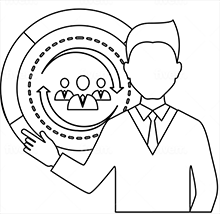 While traditional training can increase productivity by over 20%, training and coaching combined reportedly can result in over a 80% increase in work performance (as cited in TCS, 2017). We all know that Leadership and Coaching can make a difference, however, from personal experience, you must be cautious especially with the use of multi-rate 360 degree assessment tools to not make situations worse.

According to a recent Society for Human Resource Management article (SHRM. 2021), there are pros and cons with the use of 360-degree assessments. Human resource professionals caution organizations to carefully consider the use of a multi-rater 360-degree feedback tool before employing them.

According to Wikipedia, the earliest incarnation of a 360-degree assessment appeared in the military during World War II. Feedback from multiple sources was gathered to evaluate the performance of enlisted personnel.

The Esso Research and Engineering Company has the earliest recorded use of surveys for collecting information relating to employee performance, and it is from here that the idea of 360-degree feedback was devised and slowly gained momentum.

By the early 1990s, most HR professionals understood the concept. But due to the complex calculations and sheer amount of paperwork involved in assessing a single individual, they were rarely implemented in practice.

It was not until the rise of the Internet and the use of online surveys that 360-degree feedback gained momentum and became a practical tool for HR practitioners.

Today, over 33 percent of U.S. companies reportedly use some form of 360-degree feedback, though some claim the number is closer to 90 percent.

The accuracy of an assessment typically improves with the length of time the rater has known the assessed individual. This is regarded as the most significant effect on the accuracy of a 360-degree assessment.

Studies indicate that 360-degree feedback assists in improving employee performance because it helps the evaluated staff see their performance from different perspectives. However, on the flipside, when results impact pay and promotion opportunities they can be dangerous to use and potentially destructive.

The most effective use is when 360-assessments are used as part of a leadership development and coaching initiative. Studies show that 360-degree feedback may be indicative of future performance. When feedback was given to individuals, 84 percent demonstrated change after undergoing the assessment and receiving the feedback.

Leadership coaches report that 360-degree feedback is most effective when focused on needed competencies and skills. Potential factors affecting behavior change include how raters are selected, manager approval, and instrument quality. However, from personal experience, employees have to be ready and willing to accept constructive criticism which is not easy for any of us.

The Centrestar’s Leadership Competency Inventory™ (LCI) can be used as a development tool to provide ratings across many behaviors. The 35 competency assessment has been used as a 360 degree multi-rater tool for a variety of applications from coaching initiatives to an aid for selecting participants for an organization’s high-potential leadership development program.

What To Do: Actions You Can Take Now

How to Learn More

Read About the 35 Competencies Needed to Succeed

If you’re new to how effective a professional online training course can be, try Centrestar’s free Professional Ethics course. See how convenient online and on demand education can be. Click here to try our free course.

Wesley Donahue is President of Centrestar, Inc. a unique training organization that specializes in helping people identify anduse the 35 competencies needed to succeed in any profession. Learn more at www.centrestar.com.

Wes’s background is in engineering, six-sigma black belt, certified project management, and business ownership. He’s also professor of Management Development and Education at Penn State University where he leads an online graduate program in organization development and change. Contact him at This email address is being protected from spambots. You need JavaScript enabled to view it.. or use our contact form.

The 35 competencies are also categorized by the following five overarching competency domains or clusters which are aligned with our competency model: